I’ve had every iPhone since the 3G. I’m usually a case user, sometimes a screen protector. As the years have passed I’ve dropped the phone, watched it fall off things and after having kids … let’s just say I’ve been impressed with the phone’s build quality.

I know it’s only a matter of time before I break one. I’ve seen enough cracked screens to know it’s an inevitability. That’s part of the reason my 6+s (or is it 6S+?) is in an OtterBox. I also don’t technically own the phone so I’m, you know, trying to keep from having to buy it. That’s where my adventure at the park comes in.

Me and the 3 littles started the day at my favorite playground. It’s an elementary school that has 2 great play sets right next to each other. The one aimed at younger kids is robust enough that my 4-year-old digs it and the big kid side isn’t so extreme that the 2-year-old is terrified of the slide.

It was a perfect morning, slightly overcast, a nice breeze, not quite oppressively hot yet and we had the place to ourselves.

That’s when things went off track. I’m not sure why but getting in the car and going anywhere has become a struggle for little Miss 2. I could tell her we are going to eat ice cream, at a pony ranch, that has a swimming pool and the girl would get in the car as if she was on her way to an audit.

Heaven help you if you try to buckle her. She can “do it”. She just chooses not to for what seems like an eternity.

After a few minutes of waiting, I set my phone down, put her in her seat and buckled her. With the kids secured I was off to the grocery store.

About 4 miles down the road (a Texas Farm to Market road with a 55 mph speed limit) I look at my Pebble Time smartwatch and notice that my phone isn’t connected. Then it hits me. I set my phone on the roof.

Quick (safe) u-turn and I buzz back to the school to try to find my phone. Worst case scenarios were racing through my head. Once back at the school we retraced our route away from the playground and found nothing.

As we were leaving another family was arriving so I went and asked the mom if she’d seen my phone, she hadn’t. Thankfully she was an iPhone user and let me use the “Find My iPhone” app. 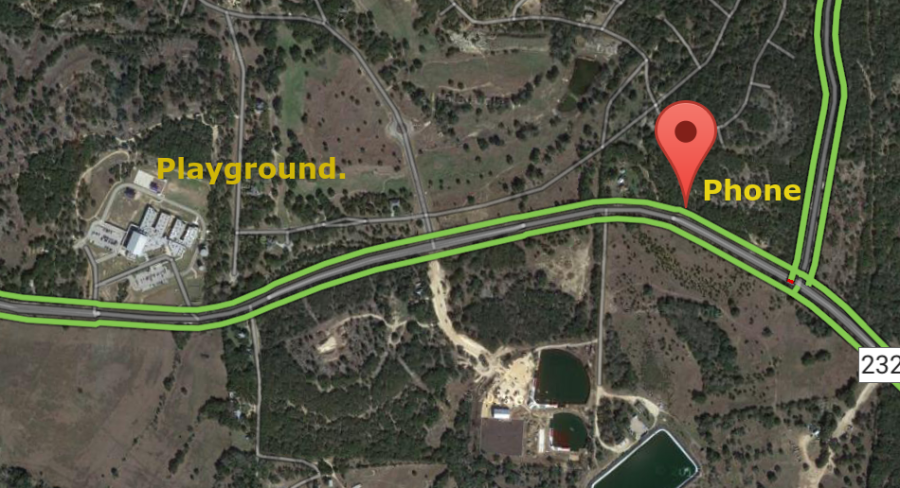 In seconds I knew my phone was at least alive. It was .7 miles away on the side of the road. I put the phone in “lost mode” with a message if found call my wife and I had it play a sound (a strange sonar like ping that I frequently make it play when my toddler takes daddy’s phone to who knows where).

With the location in mind I jumped back in the car and headed to the spot marked on her phone. If I would have had a second phone finding it would be easy but I didn’t so I got out hoping to hear the pinging (I didn’t).

After a couple minutes of searching a septic pumping truck stopped and two workers got out to help me look. We searched where I thought my phone had shown up on the app. No luck.

So we crossed to the other side of the road (the side I would have driven back to the school on). A few more minutes of searching and all of a sudden I could have sworn I heard the ping. Unfortunately the road was busy enough that I couldn’t be sure.

Then one of the septic guys yelled that he found it.

Moment of truth time. How much am I going to have to spend to fix it? Will the damage be minimal enough that I can get by until I have to get it repaired? Then I saw it.

It was dusty. The phone was overheated so it had shut down. The case had a ding on one corner and a scuff on the other. The screen … the screen was fine. Everything was fine. I cooled it off and everything is working just like new.

I’ve always thought Otterbox and similar cases were a bit much, even overkill. I only have a very basic model but it did it’s job better than I could ever imagine. I’m now an OtterBox Believer.

Modern technology is great. My smartwatch alerted me to the fact my phone was gone and GPS and a stranger’s phone allowed me to know roughly where it was. Without that quick response the Texas sun’s heat would have likely shut the phone down and who knows when or if it would have been found.

Then there’s the case. The car was moving at 55-60 mph when I imagine the phone slid off the roof and bounced across the road. Luckily it hit in just the right spot. I have lots of friends whose phones have taken a less dramatic fall and shattered. Amazingly mine survived.